NETmix is a novel mixer and chemical reactor that consists on a 2D network of mixing chambers interconnected by transport channels, creating a series of zones of complete mixing (the chambers) and of complete segregation (the channels). The network is generated by the repetition of unit cells where each unit cell consists of one chamber and two inlet and two outlet channels oriented at a 45º angle from the main flow direction. Above a critical channel Reynolds number, the system evolves to a self-sustained oscillatory laminar flow regime inside the mixing chambers inducing local strong laminar mixing. Mixing occurs in these chambers when the two streams coming from each channels are contacted and engulfed through chaotic mixing, causing repetitive fast mixing throughout the entire network. Different designs of the chambers and channels enable the pre-definition of mixing rates both locally and along the reactor and with different reactant injection schemes, enabling a vast range of selectivities for complex reactions from the limits of CSTR to PFR.

NETmix makes a very efficient use of the energy for mixing, having characteristic power numbers close to one, clearly surpassing state of the art stirred tanks and other static mixers. This static mixer permits the efficient control of fluid mixture, in an optimized and reproducible way, an essential factor for the control of complex reactions. It has been successfully tested for: fast precipitation/crystallization reactions; liquid-liquid reactions; photocatalytic reactions; and the production of gas hydrates. 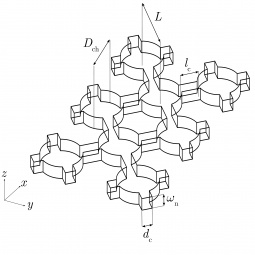 Network with 5 rows and 2 columns 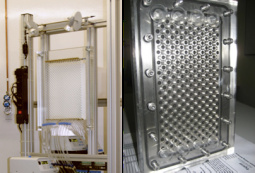 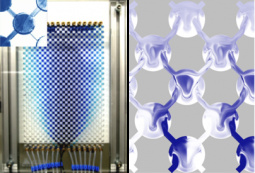 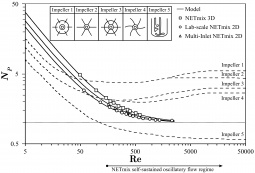