Confined impinging jets (CIJs) are highly efficient mixers that contact two reactants as opposed jets streams. Reaction Injection Moulding (RIM) is an industrial process for production large polymer (mostly PU) parts where mixing and the monomers and chemical reaction starts in a CIJs reactor. Previous theoretically studies, contrary to what was observed experimentally, should that two opposed jets under laminar flow regime would not mix to a scale for the polymerization reaction to occur.

Studies of mixing in CIJs at LSRE-LCM started back in the 1990’s, base on 2D Computational Fluid Dynamics (CFD) models and Laser Doppler Anemometry (LDA) experiments, trying to answer the question “why does RIM work?”. The first main contribution was that chaotic vortex shedding in CIJs is the main mixing mechanism in RIM, and these vortices are associated to a mechanical oscillation, which can be used on the industrial control of mixing in RIM. This resulted in a patent and a new RIM technology - RIMcop. The association between mixing dynamics and the equilibrium of opposed jets in CIJs was further extended to a model based on an elastic analog of the opposed jets. This model introduces a robust design equation for CIJs that can be applied over a wide range of flow rate ratios and viscosity ratios of the stream feeding each nozzle. A patent was submitted regarding a novel RIM mixing chamber design based on this model. The spin-off company MICE-molds is using this novelty and RIMcop for the production of plastic parts.

Research on opposed jets mixers has shown that in 2D geometries under laminar flow regime, it is possible to generate vortices at high frequencies that can promote fast mixing of two reactant streams. This concept of 2D mixing under laminar flow regime promoted by strong convective patterns consists on a disruption relative to previously established know-how, where turbulent flows with vortex stretching, mainly a 3D phenomenon, were considered as the best conditions for fast mixing. The expansion of this research to prismatic geometries enabled an innovative contribution for the scale-up of microreactors, where prismatic CIJs known as T-jets are widely used. From this work, high throughput mini and micro reactors are being introduced for single-phase mixing applications. Currently the flow dynamics on 2D CIJs and on 3D prismatic and cylindrical CIJs is being analysed using turbulence statistical tools. This analysis started from the standard tools for chaotic flows and is now extended to the analysis of the flow energy distribution through the different flow scales. One application of this study is the modulation of turbulence from an external stimulus, where the flow scales are set from particular frequencies of the jets flow rate modulation. 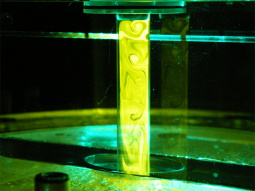 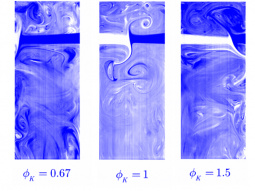 Effect of jets power ratio on mixing in CIJs 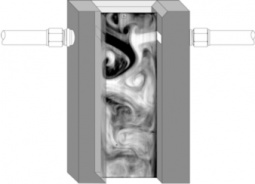 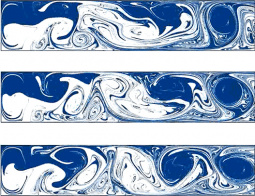