Reaction Injection Moulding (RIM) is an industrial process to produce plastic parts from the reactive polymerization of two or more monomers that are introduced through two opposed jets in a cylindrical mixing chamber. Most used materials in RIM are polyurethanes, in which case the liquid components for polymerization are an isocyanate and a polyol that must be mixed in less than one second at production rates that range from 10 to 100 kg/h. The passage times in the cylindrical chamber are in the range of 10-100 ms and the viscosities of the monomers range from 20 to 1000 mPa·s. The mixture of the two monomers that leave the mixing chamber is discharged into a mould, where polymerisation occurs. The mixing of the two monomers in the chamber is the critical step of the RIM process since the mechanical properties of the obtained product depend on the degree of mixing achieved before the reactive mixture is discharged into the mould.

The mixing chamber and the two opposed jets, the core of the RIM process, constitute a Confined Impinging Jets (CIJs) mixer and reactor and mixing studies on this subject enabled the introduction of two new RIM technology developments: control of mixing dynamics and the design of CIJs.

RIMcop, RIM with control of oscillation and pulsation, is a technology based on the strong flow oscillations associated to mixing that can be assessed from dynamic pressure measurements. Furthermore, these oscillations can be modulated to control mixing in RIM using active mixing strategies, namely the pulsation of the liquid components flow streams.

The design of the injectors for CIJs any material formulation is based on stoichiometry/mixing ratios and on the rheology of the liquid components. A theoretical model, called the mayonnaise equation, derived from an elastic analogous of two opposed jets enables the calcuation of the best mixing conditions in the CIJs.

These technologies have been successfully demonstrated in industrial applications, and are now moving on to the market through a spin-off company of the LSRE-LCM, MICE-molds. 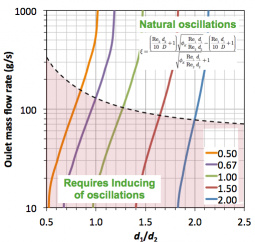 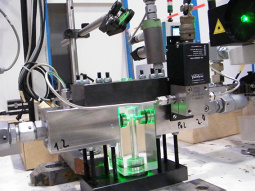 Transparent prototype assembled for the proof of concept of RIMcop 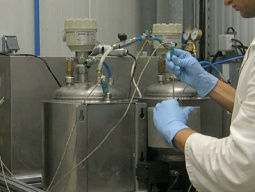 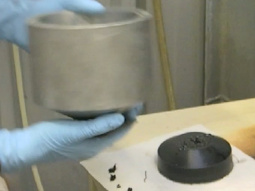 Reactive polymerization can be used to produce any type of polyurethanes (elastomeric, rigid or soft foam), nylon, reactive epoxy or DHCP materials. These materials are obtained from mixing of two liquid components, and the properties of the obtained materials depend on many parameters, namely mixing, stoichiometry of raw materials, processing temperature, and additives in the formulation (catalyst content, admixtures, chain extenders and cross linkers). Since mixing is an important parameter for the material properties, the formulation of such materials for actual production, involves tests on prototype RIM machines, which have production rates of 10 to 100 kg/min. This production rate generates large amounts of waste and requires large amounts of testing materials to have a meaningful operation time, and thus making it impractical the study of many formulations.

A new procedure is being developed for the test of reactive polymerization formulations directly in a rotational rheometer, and the mixing conditions have been studied to ensure that the RIM machine mixing can be mimicked. In a rheometer small amounts of viscous liquid components can be quickly mixed and each formulation can be assessed using only a few grams of raw materials. The formulation of materials for RIM in the rheometer enables the determination of the process time scales, namely those for the gel point and for demoulding. This procedure was tested with a polyurethane and Nylon formulations. 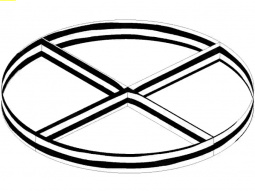 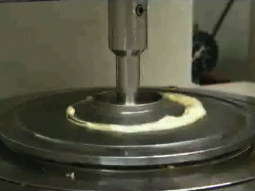 Test of a polyurethane foam in the rotational rheometer 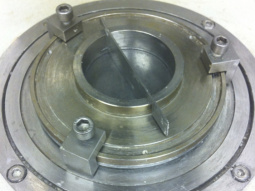 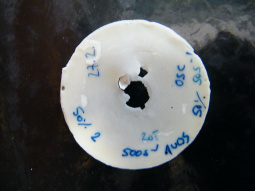 Polyurethane sample produced in the rheometer for formulation of RIM materials