For methane distribution via pipelines or liquefaction for long distance transport, the impurities of the methane in the natural gas, shale gas, tight gas, or biogas must be removed, since they can cause corrosion in pipelines, compressors, gas storage tanks and engines. Indeed, the methane for domestic gas must have 97% purity or higher, and 50 ppm is the amount of CO2 allowed for methane liquefaction. Additionally, the presence of high quantity of CO2 also lowers the calorific value of the fuel. PSA based separation is considered as a feasible technology to be employed in natural gas and biogas upgrade due to its high energy efficiency, its simplicity, low capital investment cost, and ease of control. However, besides innovation in the process design one must aim to materials with enhanced performance, such as higher capacities or higher selectivity (binderless zeolites, MOFs – MIL-53(Al), CuBTC) 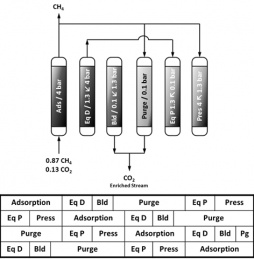 Methane Purification PSA Cycle and Its Extension For 4 Beds Scheduling 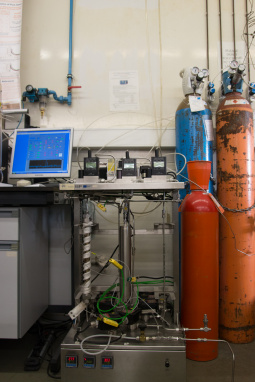 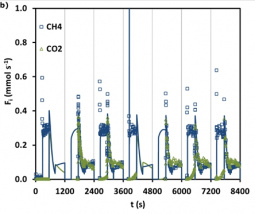 Synthesis gas or syngas is used as raw material for various industrial processes. It is a key intermediate to produce a vast quantity of compounds in the chemical industry. One of the main goals involves the exploration of effective ways of purifying syngas either for the production of high-purity hydrogen or for tuning its composition (H2 + CO). Syngas can be produced from different carbon-containing raw materials (natural gas, naphta, biomass, coal, alcohols or oxygenates, and liquid residues) and by diverse processes (steam reforming of hydrocarbons, gasification, autothermal reforming, and non-catalytic partial oxidation). Dependent on its origin, syngas can contain various impurities, such as carbon dioxide, nitrogen, methane, and water. Besides being used to obtain high-purity H2, syngas can be converted into high-value products, such as methanol or synthetic fuels, via the Fischer−Tropsch (FT) process. To be used in these processes, the syngas composition must be adjusted in terms of ideal H2/CO ratios. In the case of syngas composition adjustment, amine absorption is the currently used process, but PSA processes have been looked at as a viable alternative. One of the main focuses of the ongoing research is on new adsorbent materials that can improve the process performance, besides new processes design. 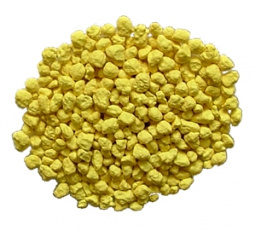 Manufacturing plastics such as polyethylene and polypropylene requires alkenes — hydrocarbons such as ethylene and propylene, also known as olefins, at high purity. Global annual production of light olefins exceeds 200 million tonnes, about 30 kilograms for each person on the planet. The industrial separation of ethylene from ethane typically relies on high-pressure cryogenic distillation at temperatures as low as –160 °C. Purification of propene and ethylene alone accounts for 0.3% of global energy use, roughly equivalent to Singapore’s annual energy consumption. New adsorbents are being developed that can separate gaseous alkenes and alkanes at mild temperatures and pressures, being paraffin selective. 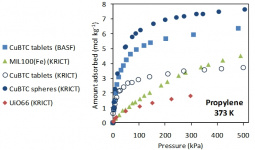 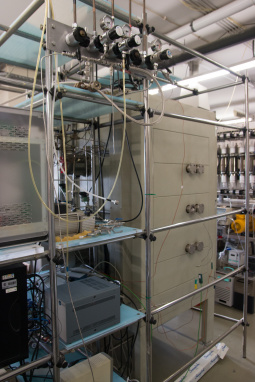 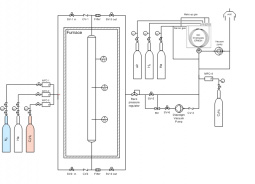 Propylene production worldwide is continuously increasing, mainly due to the Asia–Pacific region, representing more than 45% of all demand followed by Middle Eastern countries, which will probably become the greatest propylene consumer. The solid polypropylene is usually cleaned with nitrogen before unloading the polymerization reactor, removing the hydrocarbons that did not react. Therefore, a nitrogen-enriched purge stream containing valuable propylene monomer is created. The typical composition of this stream is 70% nitrogen and 30% propylene. In many plants this vent gas is combusted in a flare stack and sent to the air. Although the propylene losses are around 1–2% of the feed this represents 2000 to 4000 tons/year which means that recovery and recycling of this monomer is greatly desirable from a monetary point of view. Furthermore, reuse of nitrogen as purge gas should be of great interest, since large flow rates are involved. Alike light hydrocarbons separation the isotherm shape is critical for this separation in order to reduce regeneration costs. This study can be extended to the production of other polymers such as PE and PVC, to recover the respective monomers (ethylene, vcm). 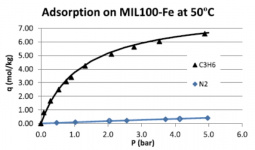 The separation of light olefins / paraffins by Simulated Moving Bed Technology using higher alkanes as desorbent will require a second process to separate the eluent from the raffinate and the extract streams. The later separation can be carried out by adsorption with an adequate adsorbent. Pressure Swing Adsorption (PSA) provides an efficient and economical means for separating a multi-component gas streams. The high affinity of the olefins to many of the microporous adsorbents makes the selection of an efficient adsorbent with low energy requirements for its regeneration a challenging task. Mesoporous MOFs, like MIL-100(Fe), are promising materials since the adsorption equilibrium isotherms, unlike for other MOFs, are not very steep at low pressures and therefore its use in a PSA process does not require high vacuum for the regeneration of the adsorbent, with clear benefits from the energetic point of view.

Along the last decades, the refining industry has attempted to enhance the octane quality of the gasoline fulfilling the environmental standards imposed. This continuous effort began in 1970, when Shell started the first hydroisomerization reactor, the Hysomer, whose function is to convert the low RON (RON – Research Octane Number) linear paraffins into high RON branched ones by catalytic reaction at a temperature range between 500 K and 550 K. However, this reaction is incomplete and a large fraction of linear molecules remain in the output isomerate. To overcome this problem, Universal Oil Products -UOP coupled to this reactor an adsorption unit, named IsoSiv, packed with zeolite 5A. This unit removes the normal paraffins from the output of the catalytic reactor, and recycles this stream for complete conversion in the Hysomer. The resulting cluster is known as the Total Isomerization Process –TIP and the octane enhancement results in an isomerate having RON of 82. Now a days, improvements to the TIP process can come not only from the process side, but also from the materials side. Regarding the process, our research has been developed to study the separation linear/mono/di-branched paraffins in a cyclic Pressure Swing Adsorption process using a layered bed of zeolites 5A and Beta. This idea comes from the fact that Zeolite Beta proved to be an efficient separator of mono-branched from di-branched paraffins and zeolite 5A an efficient separator of linear and branched paraffins. From the material side our research has been focused on Porous metal-organic frameworks (MOFs), which are new types of zeolite analogues of significant interest for potential applications in gas storage, separation, heterogeneous catalysis, and sensing. Unlike traditional porous zeolite materials whose pores are confined by tetrahedral oxide skeletons and thus difficult to be tuned, the pores within MOFs can be systematically varied by the judicious choice of metal-containing secondary building units (SBUs) and/or bridging organic linkers. This superior feature is significantly important to develop novel functional materials for gas separation, which are based on their selective sorption behaviours and mainly determined by size exclusion effect in which smaller molecules can go through the microporous channels while larger substrates are blocked. The studied structures include UiO-66(Zr) and its functionalized analogues, ZIF-8, MIL-100(Cr), MIL-125(Ti)-NH2, and MIL-127(Fe). 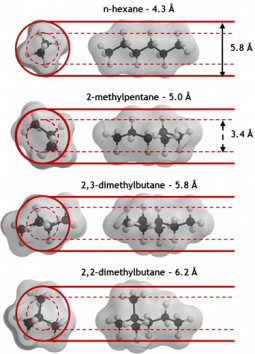 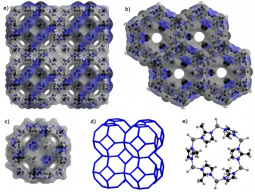 Anthropogenic emissions of CO2 released from heavy industrial activity are key contributors to global climate change. It is expensive and technically difficult to capture CO2 from diluted sources such as power plants, cement, steel industry, and refinery exhausts, and air. Liquid amines react readily with CO2, but because heat must be applied to regenerate the liquid, the process is not economically viable for power plants. If the approach was applied to every power station in the United States, CO2 capture could cost 30% of the country’s growth in gross domestic product each year. Cheaper methods for capturing CO2 emissions with minimal energy costs need to be developed. A complicating factor is deciding what to do with the purified product. CO2 could be used in a crude-oil production method known as enhanced oil recovery, or in vertical farming and as chemical and biorefinery feedstocks. But human activities emit so much of the gas that in practice much of it will need to be stored for long term in underground reservoirs. Required CO2 purities for these applications are usually above 85%. Depending on the CO2 concentration in the target stream PSA or TSA/ESA processes are good candidates. Once again the nexus process / material is of outmost importance. For PSA processes we need materials with high capacity but at same time easy to regenerate. While for TSA/ESA processes, due to the high volumes to treat it is necessary low pressure drops but with high capacity, making monoliths the best candidates. ESA processes present another requirement, that the monolith has conductance, making composite monoliths necessary. 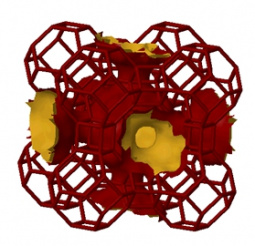 Gas phase composition history during one cycle at CSS 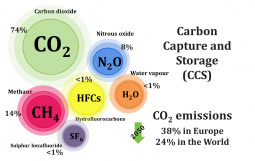 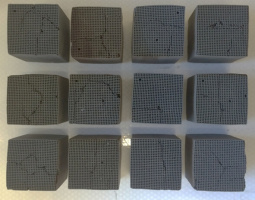 Besides new materials, the separation of light olefins and paraffins will require also new technological solutions. To pursuit this objective, gas-phase SMB is being studied as a competitive alternative to the conventional process. Experimental tests, performed in a bench scale unit, have shown that it is possible to obtain high purities with high recoveries, demonstrating that this technology is a strong candidate to replace the current state of the art technology. 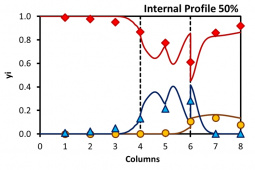 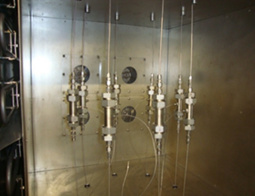