Water and wastewater treatments are of ever rising concern due to increasing pollution problems. Adsorption processes are viewed as relatively simple methods. The manufacture of many commercial adsorbents involves high costs, which has implications for the environment. The research team has been working on the development of environmental friendly technologies, in order to achieve sustainable and ecological solutions for water/wastewater treatment. The valorization of marine seaweeds as biosorbents for the separation and recovery of toxic metal and metalloid species from metal bearing waters is one of the strongest research topics. Marine brown macro-algae (Laminaria hyperborea, Fucus spiralis, Pelvetia caniculata and Ascophyllum nodosum), collected on north Portuguese coast, have been established as natural cation exchangers, in which transition metal ions (Cd2+, Pb2+, Cu2+, Zn2+, etc.) present in the wastewaters exchange with Na+, K+, Ca2+ and Mg2+, bound to the negatively functional groups existing on the algae surface. The cation exchanger capacity (between 2.0 and 2.4 mmol/g) of the natural resins with a gel structure is related to weakly acidic and strongly acidic functional groups present in the cell wall of the biomass, mainly carboxylic and sulfonic groups, respectively. The reuse of the exhausted natural macro-algae exchanger can be performed in two consecutive steps: i) desorption using a strong acid, in which transition metals are easily replaced by protons; ii) regeneration, in which a concentrated calcium solution, is passed through the column, with recycle and protonated biomass is converted to Ca2+ exchanger. The macroalga was also found to be an effective electron donor for the removal of hexavalent chromium from electroplating wastewaters, through complex reduction/oxidation reactions which occur at the surface of the biomass. The reaction mechanism involves a reduction of Cr(VI) to Cr(III) at acidic medium (1 g of biomass L. hyperborean and P. canaliculata is able to reduce 2.1 and 3.0 mmol Cr(VI), respectively) through the oxidation of the biomass, which is an electron donor, and further chemical binding of Cr(III) to the negatively charged binding groups. An interesting result was that the uptake capacity of Cr(III) by the oxidized biomass after Cr(VI) reduction was higher than by the algae in its original form. This can be attributed to the oxidation of the biomass during Cr(VI) reduction, turning other active sites available for Cr(III) binding. Lab and pilot scale tests have demonstrated their applicability for heavy metal removal from galvanic and petrochemical wastewaters. Brown and green seaweeds have been also investigated as biosorbents for oxyanions removal (Cr, Sb and Se). Iron coated-seaweeds have been studied for arsenic uptake from water. This kind of adsorbent was also able to oxidize As(III) in solution to As(V), which is a less toxic form. Recently, tannins extracted from maritime pine bark (abundant residues in North Portugal) have been also explored as precursors for the synthesis of effective biosorbents for heavy-metals, toxic metalloids and for the recovery of critical metals from waters. Cork granules have been also used as concentrators and recuperators of oil from water. The oil is retained in the exterior cork cells by capillary forces and afterwards oil can be expelled from the cork cells by mechanical compression. 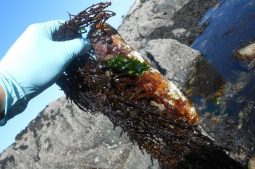 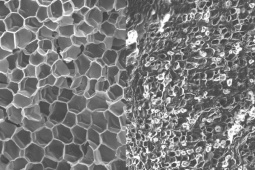 SEM analysis of cork cells without (left) and with (right) oil 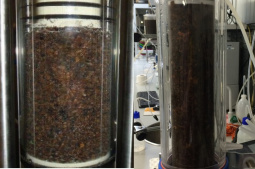