The creation of a perfume results from the perfumers’ experience, olfactory perception, creativity and inspiration. However, what is apparently a simple procedure enclosed in magic and pure artistic creativity is rapidly transformed into a complex, lengthy and costly process. Given the high number of raw materials available to perfumers with different physicochemical properties, it is easy to imagine the high number of combinations needed to reach the idealized scent. This is because the prediction of the final odour of a fragrance mixture is something that cannot be solved simply from art and common sense, but instead it requires scientific knowledge from different fields.

The PTD® methodology was developed for prediction and representation of the odour character of ternary to quaternary mixtures of fragrance ingredients if the fourth component has a fixed composition (and so, the remaining components are represented on a solvent-free basis). This methodology makes use of engineering tools, like the ternary diagrams, to represent the effect of the predicted odour in the headspace as a function of the composition of the chemical components.

Later, an extension of PTD® concept, called PQ2D® was created using tetrahedric 3-dimensional diagrams to map the odour space of quaternary to quinary fragrance mixtures. This new model follows its predecessor in much part of the methodology with a particular advantage of its three-dimensional representation. 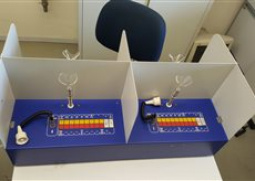 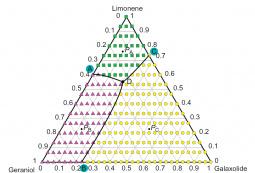 PTD® for the ternary system limonene, geraniol and galaxolide 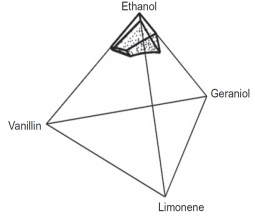 PQ2D® for the quaternary system limonene, geraniol, vanillin and ethanol 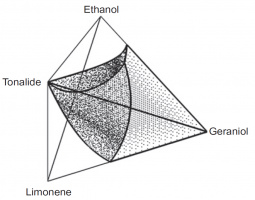 PQ2D® for the quaternary system limonene, geraniol, tonalide and ethanol

The performance of a perfume is a very important topic for the design of novel and improved scented products. Albeit the modelling tools proposed by R&D departments from the fragrance industry to describe odour diffusion, they mostly report on experimental measurements due to the difficulty of developing theoretical models to traduce these phenomena. For this reason, fragrance performance is often experimentally assessed by sensory evaluation using panellists, but considering the inherent human interpersonal variability, increasing time required for such experiments and, ultimately, costs associated with the sensory evaluations, this approach becomes unattractive.

As an attempt to propose alternative methodologies, we developed a new predictive model, called the Diffusion model. This predictive model accounts for the dispersion of small volumes of perfume liquid mixtures in air over time and distance considering the fundamental approach based on the Fick’s law for diffusion, and their performance in terms of olfactory perception using perfumery concepts. Currently, we are developing novel methodologies for prediction of the performance of fragrances from all kind of matrix used in toiletries and household products. 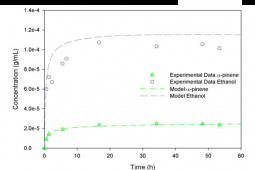 Diffusion of the binary mixture of ethanol+α-pinene in air 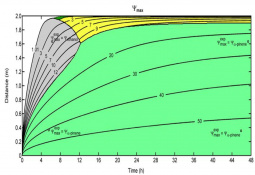 Fragrances are empirically classified into olfactory families (such as citrus, floral, green, fruity, herbaceous), comprising or not subfamilies or nuances (the back note from the main olfactory sensation). However, even among experts and fragrance houses, fragrance classification is not unanimously recognised. Therefore, it is important to create connections between perception and language in order to simplify the design and classification of fragrances.

Following this line of though, we developed the Perfumery Radar (PR) and the Perfumery Radar 2.0 (PR 2.0); two methodologies able to predict the classification of perfumes using the olfactive families used by perfumers. PR 2.0 uses the original assumptions from its precursor, with the advantage of providing more detailed description of the odour space introducing inner and outer layers of classification, and allowing the extension to all gender classes (masculine, feminine and unisex fragrances). These tools start from the composition of the liquid mixture and molecular structures of perfumery raw materials together with their corresponding olfactory qualities to predict and characterise the odour space. 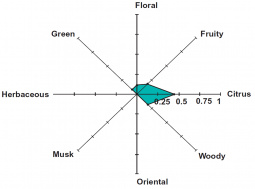 PR of the orange essential oil 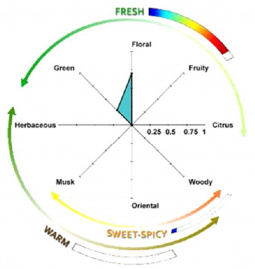 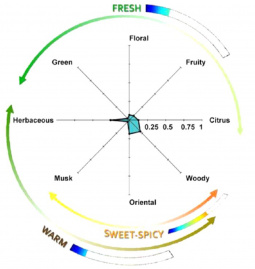 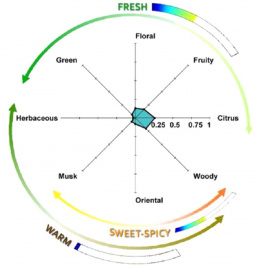