The European Renewable Energy Directive 2009/28/EC set a target of 20% of the overall energy to be derived from renewable sources by 2020. Energy generation/storage devices based on renewable sources are under development to achieve this goal. Fuel cells are seen as a viable technology in this context, especially for portable devices and transport applications, since the electrical energy is produced by an electrochemical reaction instead of a combustion reaction. However, the intermittent nature of renewable sources (like solar and wind energy) may compromise the energy supply. The Unitized Regenerative Fuel Cell, URFC, is an electrochemical device that combines a fuel cell with an electrolysis cell, adjusting the energy production peaks from renewable resources with the energy demand: the electrolysis mode is activated when there is an excess of electric energy, which is converted into chemical energy by electrochemical water splitting, the hydrogen produced being stored on-site for subsequent consumption, when the URFC activates the fuel cell mode to supply the energy needed. Despite its enormous potential, one of the drawbacks of these devices is their high dependency on precious metals such as platinum and iridium, usually used as electrocatalysts.

The Fuel cell (FC) is an electrochemical device with two electrodes (anode and cathode) separated by an electrolyte, their surfaces being covered with a thin layer of an electrocatalyst. This device generates electricity by oxidizing the fuel (typically hydrogen) at the anode (HOR) and reducing oxygen at the cathode (ORR). In this way, the production of green-house gases is greatly reduced. So far, Pt-based materials are the most efficient catalysts for the fuel cell reactions, but their high cost, limited supply and poor stability limit the wide commercialization of these devices. Recently, carbon nanomaterials emerged as a promising class of electrocatalysts, since they exhibit high surface areas without compromising their electronic conductivity, and can be doped or functionalized in order to present active sites for the hydrogen/oxygen reactions. Our goal is to develop a new generation of carbon-based electrocatalysts without the use of precious metals.

Overview of the electrocatalyst study process for fuel cell applications

Composite electrocatalysts for OER and ORR

The components of the electrolyser unit are similar to those of the fuel cell devices. In the electrolyser electric energy in converted into chemical energy based on the electrochemical electrolysis of water, either in acid or alkaline electrolytes. Hydrogen is produced at the cathode, and oxygen is released at the anode.

The electrolyser is greatly constrained by the high potentials of both the oxygen (OER) and hydrogen evolution (HER) reactions and the lack of stability of the electrode materials. Research efforts are focused on the development of non-precious metal based electrocatalysts. We have recently started working on this topic in collaboration with a group of IST-University of Lisbon, using Mo2C and MoS2 supported on carbon materials for alkaline water electrolysis. 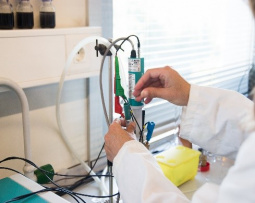 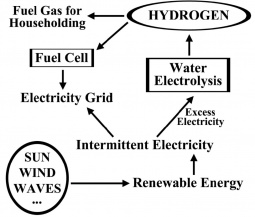 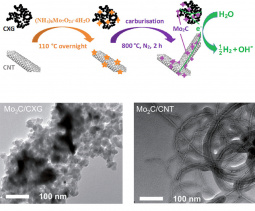 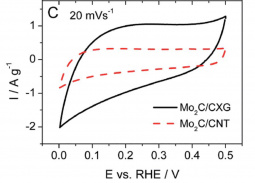 In view of the finite nature of fossil fuels and the tremendous growth in energy demand, new forms of energy production are required. Renewable energy sources (such as wind and solar) are highly intermittent, consequently, alternative energy grids would require energy storage systems as reservoirs to allow a constant power delivery. Electrochemical cells (batteries) and Electric Double Layer Capacitors (EDCLs) present outstanding response to power supply fluctuation, being considered as key technologies to play this role.  Electric energy can be stored by capacitive adsorption of ions on an electrode surface (capacitors) or by reversible faradaic processes on the electrode surface (batteries). Supercapacitors or Electrochemical double layer capacitors (EDLCs) are promising energy storage devices due to their high power density and small size. Nevertheless, there is a huge technological bottleneck derived from their low energy densities (3-5 Wh/kg) which are not comparable to commercialized lithium-ion batteries (100-300 Wh/kg). The scientific challenge is to push the state-of-the art beyond current knowledge in order to prepare electrode materials combining capacitive/faradaic storage to provide “hybrid” electrochemical devices for advanced energy storage.  On the other hand, the manufacture of such high-performance energy storage devices involves a deep understanding of the phenomena occurring on the electrodes surface during operation. Our current research not only focuses on the development of novel carbon electrodes for EDCLs but also on their thorough electrochemical characterization. 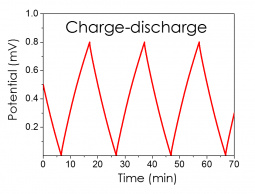 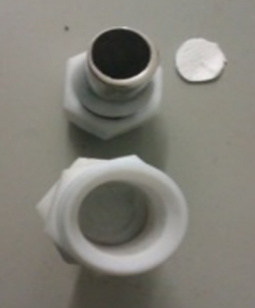 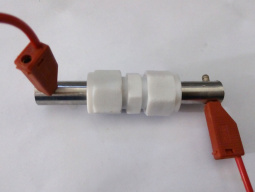 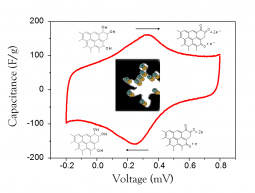