Biomass Conversion into Fuels and Chemicals

The emerging concept of sustainable development driven by the concerns about the supply and cost of petroleum as well as by the environmental issues, gave rise to a strong incentive for development in the area of using biomass conversion to fuels and value added chemicals. In this context, lignocellulosic biomass, which is composed of cellulose (40-50%), hemicelluloses (25-35%) and lignin (15-20%), is the most abundant, renewable and non-edible raw material. However, the catalytic processing of biomass-derived feedstocks to liquid fuels and chemical intermediates is complex and expensive; therefore many challenges have to be overcome in order to replace the fossil fuel based economy with sustainable biorefinery technologies.

Depolymerisation of cellulose to glucose can be combined with consecutive catalytic modifications leading to valuable intermediates, thus significantly reducing the cost of biomass conversion. For example, cellulose can be converted into platform chemicals using bifunctional catalysts in one -pot tandem reactions. Following this strategy, by coupling hydrolysis of cellulose to glucose and its subsequent conversion via eg oxidation/hydrogenation/dehydration, it is possible to obtain gluconic acid, sugar alkohols, 5-(hydroxymethyl)furfural and many other versatile building blocks for the sustainable production of chemicals and fuels.

The synthesis of sugar alcohols/polyols as platform chemicals from cellulose and hemicellulose as starting materials is also under investigation. The one-pot hydrolytic hydrogenation involves an initial hydrolysis step leading to the corresponding sugar monomers (e.g. glucose in the case of cellulose), followed by catalytic hydrogenation of the sugars to sugar alcohols. Sorbitol and xylitol are two of the most important products, which can be obtained from cellulose and hemicelluloses, respectively, both being in the TOP-12 biomass based, added-value products. The direct conversion of cellulose and hemicelluloses (xylan) into these polyols can be achieved with efficient carbon-based catalysts, such as Ru (0.4 wt% loading) supported on carbon materials, such as activated carbon, or carbon nanotubes.  Moreover, the yield of the main products can be greatly enhanced by milling the substrate together with the catalyst. In addition, the selectivity of the catalyst in hydrolytic hydrogenation of cellulose can be controlled by addition of a second metal to Ru. For example, the selectivity of the tandem process changes from hexitols (e.g. sorbitol) to ethylene glycol and propylene glycol by addition of W. 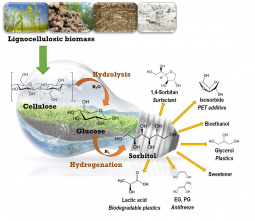 Catalytic conversion of cellulose into sorbitol 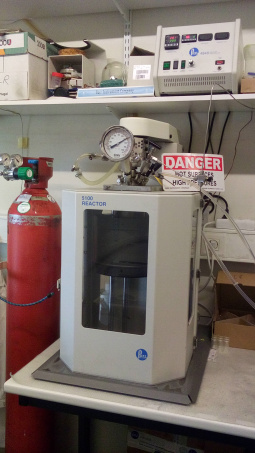 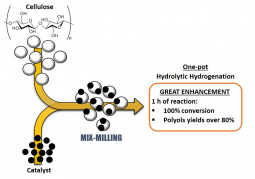 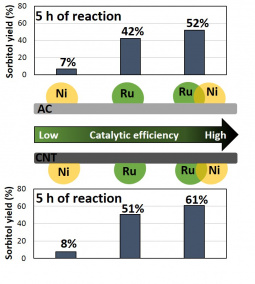 One of the alternative catalytic pathways of biomass conversion is the direct transformation of cellulose into gluconic acid. Gluconic acid is an important chemical used as chelating agent, food additive, water soluble cleanser and intermediate for pharmaceutical and cosmetics industries, with an estimated market of 60 000 tons per year. In tandem oxidation of cellulose to gluconic acid, cellulose is hydrolyzed to glucose on acidic sites on the catalytic support. Glucose is then further oxidized to gluconic acid on metallic sites (e.g. Au nanoparticles) present on the same catalyst. An objective of the research is to develop selective and hydrothermally stable bifunctional catalyst based on carbon materials (carbon xerogels, carbon nanotubes, graphene) with tailored active sites, which are able to carry out cascade reactions in water. Various functionalization techniques of carbon supports such as grafting, in-situ or post-synthesis doping are employed in order to obtain well-tuned acidic sites for the first step of the tandem process. In addition, the yield of the desired product can be increased by controlling the selectivity of the oxidation step by catalyst preparation method and by the addition of the second metal (Au‑M; M= Pd, Ru, Rh, Pt) to form alloys or core-shell structures. 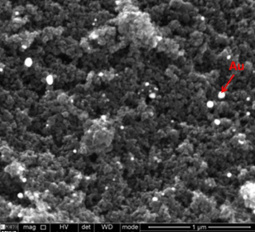 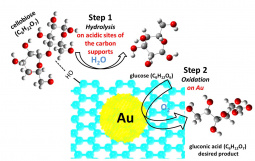 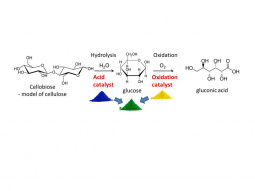 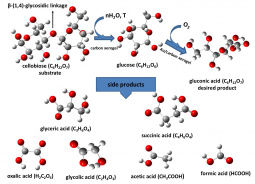